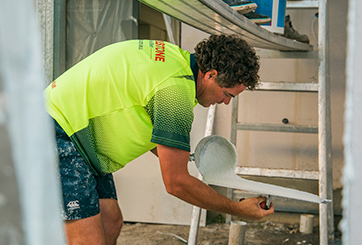 You’ve probably heard people talking about getting their house rendered and you may or may not have wondered what it means exactly. If you did wonder and found out at the time, great; if not, read on to fill in the gaps.

Rendering is the application of cement to (usually) the external walls of a building. Sometimes it’s applied to internal walls, but most often it’s the exterior that gets the treatment.

The eventual look can be smooth or textured, depending on your design, but it’s best to be carried out by qualified plasterers. Rendering has been common in Europe for centuries, and only recently became popular in Australia. It used to be done on some mudbrick buildings, but other than that, it’s been an unusual technique here.

Why would a house need render?

Rendering improves the fire-rating and also the waterproofing of a building, but it’s mainly done for appearances. Many Mediterranean buildings look smooth and often stunningly white, but they’re mere bricks and mortar underneath. In some regions of Europe, the local councils have set colours that can be used. It’s now catching on in Australia and more and more buildings are getting a new coating.

The primary ingredients of render are sand, cement and lime. The lime adds a smoother, creamier texture to the mix and makes it less vulnerable to cracking once it’s dry. The sand must be very fine and pure, and other ingredients like bonding agents, pigments and additives to slow down drying (to prevent cracking) are usually added.

The render is applied by putting on smooth, think coats with a trowel, although the top coats can be applied with a sponge or a brush if a particular texture is wanted.

As with everything, progress makes big improvements and now there are acrylic pre-mixed renders that are more waterproof and that can be applied to the sorts of surfaces older render mixes can’t stick to. Acrylic mixes are handy in that they can be set within 24 hours, whereas older mixes can take three or four weeks.

Can I do it myself?

In theory you could, but it wouldn’t save you much money as you’d still need to buy in your mixes and equipment, as well as take a few days off work. In addition to this, you almost certainly wouldn’t get the same look, durability and uniformity that a professional renderer can give you.